Although legends do not always conform to historical truth, they do however provide an element of mystery and fascination. Believing is enough. 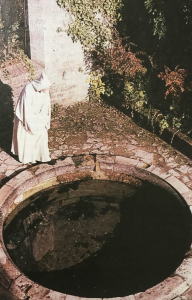 This winter, when the sun has gone down and you are sitting close to the open fire, take your eyes off the flickering flames just long enough to open a good bottle of Orval beer. Slow
ly pour it into a glass and bring it to your lips. Listen very carefully, because I am now going to tell you the story of Mathilda’s fountain.

A long time ago, in the 11th century, Calabrian monks arrived in Orval to found the first monastery on land offered by Arnould, Count of Chiny. The Count’s suzerain, Godefroid, the Humpback, Duke of Lower Lorraine and Godefroid de Bouillon’s uncle, had married Mathilda, Countess of Tuscany. This was to be a very unhappy and stormy marriage which did not last long because the countess’s husband was assassinated on the orders of the Count of Flanders. Mathilda, already widowed, later also lost a child, who was mortally wounded when it slipped on the frozen waters of the Semois.

To distract her from her despair, the Count of Chiny took her to visit the monastery and its surrounding countryside. Tired and weary, Mathilda sat down by the edge of a clear and sparkling spring. Wanting to quench her thirst, she plunged her hand into the cool water which caused her precious wedding ring to slip from her finger. After a long and unsuccessful search,
she invoked the name of Our Lady. Just then, a trout jumped out of the water holding her wedding ring in its mouth, at which the countess exclaimed : “This really is the Vale of Gold !” (Val d’Or in French). As a sign of gratitu- de, she later richly endowed the Orval monks.

The Orval brewery is still supplied with water from the fountain and the abbey’s coat of arms perpetuate the memory of this legend. History has remembered Mathilda of Tuscany’s support of Pope Gregory VII against Henry IV in the fight for the Investiture, the famous meeting of the two belligerents on her estate in Canossa in 1077, as well as the donation of her States to the Papacy.

Either in the Spring or in Summer, stop a moment by the fountain’s clear water. Perhaps You will see the trout with the golden ring or fleetingly glance at the countess’s ethereal silhouette.